Plaintiff [Donald J. Trump], and Plantiff’s lawyers,
are urged to reconsider their opposition
to Defendant’s [Attorney General of New York,
Letitia A. James] Motion to Dismiss.
This litigation has all the telltale signs
of being both
vexatious and frivolous.

— Federal Judge Don Middlebrooks,      of the Southern District of Florida — 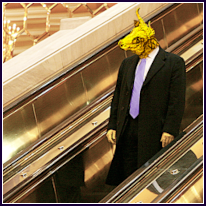 Understanding the audience,
the golden calf fatted descends down
a golden escalator
[orange as the sun]
and nationalists
and fascists floorshow in boots
in the glow of the beast,
a primal hate thought to be tamed.
Focused. Named.
Inevitable: the brute turns.

Panicked worshippers flee
with question-mark gestures,
accepting no blame.
With gnashing of teeth,
many start bawling,
imagining the mauling
by the bovine
falling down,
coming up.

Every piece of this is man’s bullshit. They call this war a cloud over the land. But they made the weather and then they stand in the rain and say ‘Shit, it’s raining!’

Purpose as you will.

They talk about Potato Heads,
about Dr. Seuss, and Muppets.
They talk about Pepé Le Pew
[not the cat that fled],
and Big Bird—kids are the puppets,
and never should white ones feel guilt.
About no gun laws on dockets
[’cept arms to the hilt].
They talk about sports transgendered
[as a matter of course, damsels
in dungeons await heroes—
but real concern is zero:
her body, her choice
undone by Supreme <masculine> voice;
disclaim they! respect for dames
(that stay clear of video games)].
Distracted. : They pick your pockets.

The Executive Summary [Select Committee to Investigate the January 6th Attack on the United States Capitol: Introductory Material to the Final Report of the Select Committee] is longer than most books I read [A long Title and an even longer (154 pgs) abstract of traitorous Americans].

Record for the public.

with your permafrost hands
of penguin lands,
and black-iced feet
like iron-cold streets
and a frozen nose of
Kilimanjaro snows,
and icicled ears
like blizzard spears.

The campfire coals just smolder—
the glacier creeps and
plucks off years.

Blank
page of
paper waits
to be marked up
with lines and stanzas,
verse laid down with guidelines
strictly observed without fail,
the cadence of syllables met,
just the right word at just the right time —
a collage of phrases all puzzled out
for aesthetic effect when quoted out loud
or inside the mind that marvels at connections
between ideas and metaphors that draw meanings
of subtlety from some overarching theme or motif,
employing the tools of craftwork, literary devices
that jazz up the poesy and highlight the vision with precision
and with lyricism that reverberates like bells in a courtyard,
the toll flies on the late breeze toward sunset and fades out into echo.